The use of hydraulic fracturing, or fracking, has reversed declines in natural gas production. Canada has an opportunity to make a significant, positive impact on the global environment by exporting natural gas to developing countries like China and India.

For every 1,000 MW of coal-fired power generation converted to natural gas powered electricity, annual CO2 equivalent emissions are reduced by 4.4 million tonnes or just over one half of one per cent of Canada’s total. (Source: CAPP)

While the overall outcome of using more natural gas can improve global air quality, the industry acknowledges that each phase of oil and gas development has some level of air emissions that can impact local air quality. Reduction of emissions is a priority for continued responsible development of resources. Regulators, government agencies and the industry are working hard to identify and reduce emission sources.

The amount of emissions emitted during the 3-4 day fracking phase of a well’s lifecycle is relatively small. The sources for emissions during fracking operations include:

Reducing the Impact of Fracking on Air Quality

Fracking companies are implementing technology and practices to manage air quality during fracking. Emissions from the large trucks and heavy machinery used during fracking operations are reduced through the following practices:

These are examples of clean technologies that reduce emissions of oxides of nitrogen (NOx), sulphur dioxide (SO2), volatile organic compounds (VOC) and particulate matter (PM).

Silica dust is another air quality concern that is addressed by fracking equipment that filters silica dust. Operators are required to wear a full-face respirator when they are within 10 metres of the source of silica dust. 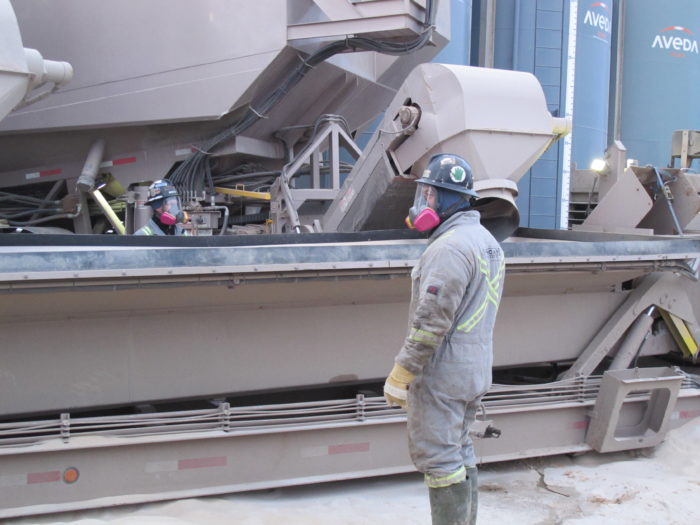 Green completions essentially eliminate air emissions associated with flowback fluids. The process involves using equipment to separate the natural gas and liquid hydrocarbons that come to the surface with the flowback fluid as the well is being prepared for production.

Green completions make both environmental and business sense. Using this process the emissions associated with venting and flaring are eliminated and the operating company has gained a product that is useable and sellable.

The use of green completions will become more widespread as provincial regulators prioritize air management and further develop regulations and guidelines to reduce flaring and venting. Between 1996 and 2010, environmental regulations in Alberta resulted in an 80% decrease in natural gas flaring from 1996 to 2010, reducing GHG emissions by more than eight million tonnes of carbon dioxide equivalent (CO2e). In British Columbia, regulations are on track to eliminate routine flaring.

Reducing the Impact of Oil and Gas Production on Air

The companies that own oil and gas wells and production facilities are working just as hard as fracking companies to reduce the impact of oil and gas activity on air quality.

At the federal level, the Canadian Council of Ministers of the Environment (except Québec) agreed to implement a Canada-wide Air Quality Management System (AQMS) as a comprehensive approach for reducing air pollution in Canada.

Provinces use a comprehensive system of regulation, air quality monitoring and reporting to manage air quality in Canada. Examples from British Columbia and Alberta of components of the system that are directly related to the oil and gas industry include:

Canada has strict regulations for the entire fracking process. The regulatory framework in place has effectively protected Canada’s environment and public health for over six decades, and the regulations are continually reviewed and improved.

Increasing global use of natural gas is an opportunity to reduce greenhouse emissions.

For every 1,000 MW of coal-fired power generation converted to natural gas powered electricity, annual CO2 equivalent emissions are reduced by 4.4 million tonnes.  According to yousustain.com, that is equivalent to taking 862,745 cars off the road for a year.

False
True
Back To Top