There’s a lot of chemistry and physics involved in refining crude oil to make gasoline and the other products we use every day. Mostly though, it’s about heat. Each of the components in crude oil has a different boiling temperature, so high heat is used to separate them in a process called fractional distillation. Here’s a look at the process. 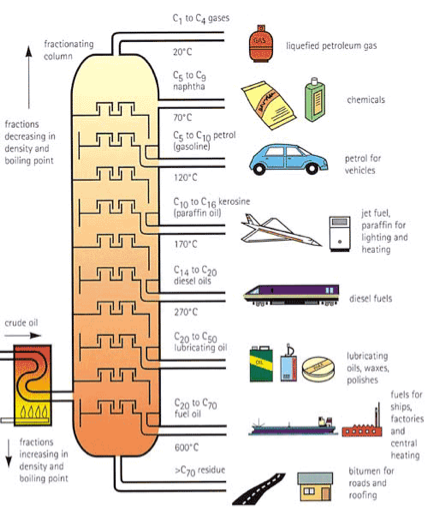 The first new refinery in North America in almost 30 years is being built north of Edmonton, Alberta.

The illustration above shows the types of products that are made from the fractions produced at each level of the column.

What the illustration doesn’t show is the part of the process between fractional distillation and petroleum product manufacturing. Here’s a quick summary: After the fractions are separated in the distillation column, they are collected and then either “cracked” (broken apart), combined together, or rearranged into the chemical combinations needed to make fuels, plastics and other petroleum-based products.