Even though Venezuela has the highest oil reserves in the world, its production has been declining since the late 1990s. Sliding production is being attributed to government policies, which direct oil revenues to social programs that support the government, without reinvesting funds into the technology and infrastructure needed for heavy oil production. (Source: Energy Information Administration) 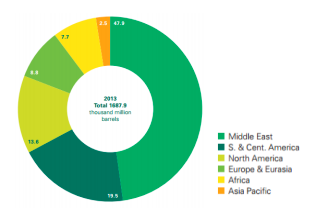 Speaking of North America, here’s an interesting fact about oil reserves in the United States. At the end of 2003, the US had 29.4 billion barrels of proved reserves. By the end of 2013, that number had grown to 44.2 billion barrels. That’s a 50% increase in 10 years, primarily due to advancements in shale oil technology.

The graph at below shows that the discovery of oil shale reserves has led the US to increase its oil production by almost 30% since 2000. (Source: Wall Street Journal)