Anyone old enough will remember the oil crisis of 1973, when OPEC members launched an oil embargo in retaliation against US involvement in the Arab-Israeli War. Although the embargo only targeted five countries – Canada, Japan, the Netherlands, United Kingdom and United States – the effects were felt worldwide. In the six months of the embargo, the price of oil quadrupled from $3 to $12 per barrel.

The oil and natural gas industry is chock full of acronyms. One that’s been in the news recently is OPEC, which stands for the Organization of the Petroleum Exporting Countries. Formed in 1960, OPEC currently has 13 member countries (as at March 1, 2021) viz., Algeria, Angola, Congo, Equatorial Guinea, Gabon, Iran, Iraq, Kuwait, Libya, Nigeria, Saudi Arabia, the United Arab Emirates (UAE) and Venezuela.

OPEC’s mission is “to coordinate and unify the petroleum policies of its Member Countries and ensure the stabilization of oil markets in order to secure an efficient, economic and regular supply of petroleum to consumers, a steady income to producers and a fair return on capital for those investing in the petroleum industry.”

In plain language, OPEC sets production targets for its member countries. When OPEC thinks the global price of oil is rising too high, it asks for increased production, because more supply typically means lower prices. When crude oil prices are dropping too low, OPEC calls for production limits (or more stockpiling) which tightens the worldwide oil market, thereby increasing prices. In theory this policy should work, because “OPEC’s oil exports represent about 60% of the total petroleum traded internationally.” (Source: US Energy Information Administration)

In 2018, Venezuela and Saudi Arabia still hold almost 48% of the crude oil reserves within OPEC.

However, some experts think that OPEC’s influence over world oil
prices may be diminishing for a number of reasons.

Because of these and other factors, and despite its members’ enormous oil reserves, OPEC is gradually losing its once-strong monopoly and is growing less able to control the global supply – and price – of oil. 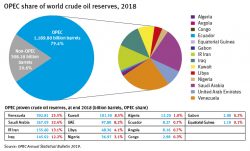